Join the orchestra as we close our 48th year with a few lesser-known selections that will bring you to your feet. Maestro Fleary introduces the extraordinarily talented Washington-based organist DR. MICKEY THOMAS TERRY. In addition to the magnificent Organ Concerto for Strings and Timpani, you will be delighted by the exceptionally well-crafted music of African American composer Florence Price, whose first major work was premiered in 1933 by the Chicago Symphony. Of course, there’s a story behind the subtitle “Naughty Limericks,” a piece filled with fun-to-hear sounds and rhythms. Maestro Fleary will tell you all about it! Bring the kids—we’ll let them take a look at the magnificent organ, too.

(Program will include NVMTA student composition) 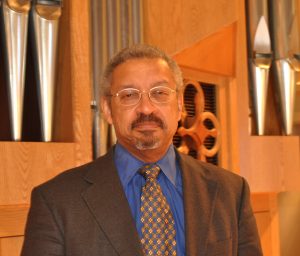 Terry has been a featured artist at Washington’s John F. Kennedy Center for the Performing Arts and organ recitalist at the Piccolo-Spoleto Music Festival in Charleston, South Carolina.  In 1996 and 1998, he presented the African-American Organ Music workshop at the American Guild of Organists National Convention.  He also served as Sub-Dean and Program Chair of the District of Columbia Chapter of the American Guild of Organists.

He has published several journal articles that have appeared in The Musical Quarterly (Oxford University Press), The American Organist Magazine, The Diapason, as well as the British journal Choir and Organ.  There is also an article that appears in Volume IV of Essays in American Music (Garland Publishers, 1999) and as well as an essay that appears in Readings in African-American Church Music and Worship (GIA Publications, 2001).  Terry is the editor of a critically-acclaimed multi-volume (currently 8 vols) African-American Organ Music Anthology published by MorningStar Music Publishers (St. Louis, Missouri).  He has also served on the Advisory board for the ECS/AGO African-American Organ Music Series published by E.C. Schirmer Music Company of Boston.

Dr. Terry has also taught on the faculty of Georgetown University in Washington, DC.  He serves as a Lecturer in Howard University’s Department of Music in Washington, DC.   He is also Director of Music at Epiphany Catholic Church in Georgetown.  He is the recipient of the 2019-2020 Artist Fellowship awarded by the District of Columbia Commission on the Arts and Humanities.  A current biographical sketch of Dr. Terry also appears in Who’s Who in America.