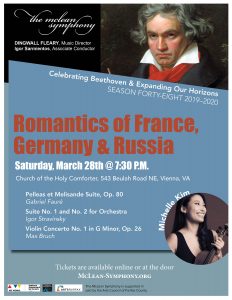 ANNOUNCEMENT TO THE PUBLIC

Under the baton of our Associate Conductor, IGOR SARMIENTOS, the orchestra demonstrates a range of styles from three very different composers whose selections were considered edgy during the times when they were written. The lush music from Pelléas and Méllisande by Gabriel Fauré and the familiar, riveting strains of the Bruch’s first violin concerto, played by MICHELLE KIM of the Kennedy Center Opera House Orchestra, will ring in your ears long after you leave the magnificent acoustics of the Church of the Holy Comforter. Finally, the concert will conclude with two short but interesting pieces by Stravinsky. 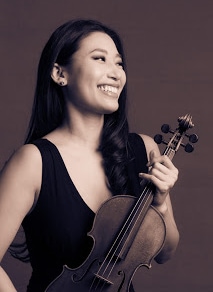 Violinist MICHELLE KIM is in the first violin section of the Kennedy Center Opera House Orchestra (KCOHO). She was born in Seoul, South Korea. Although she took violin lessons and played in youth orchestras throughout her pre-college years, when she entered UC Berkeley, she majored in Statistic. Her continued interest in the violin led her to further studies with members of the San Francisco Symphony, and participation in the university orchestra. She came to the attention of faculty members of the music department, and was encouraged to enter its concerto competitions which she won twice, resulting in scholarships for independent study.Her professional experiences have included attendance and performances at festivals around the world, including the Salzburg Mozarteum Academy, and the International Festival in Porto, Portugal. She has given lectures at George Washington University, lead chamber music workshops and master classes at Georgetown University, and introduced classical music to youngsters in the DC Public Schools. She also teaches privately.

In 2012, following a playing opportunity with visiting musicians from Tunisia celebrating their country’s Jasmine Revolution, she was inspired to start Culture Saves, a humanitarian organization that restores hope and promotes peace in troubled areas through the arts.

Also a composer and arranger, and intrigued by current trends, Ms. Kim discovered and purchased an electric violin. Drawing from that sound she formed Electric Fantasy, a six-piece ensemble of multi-genre musicians who have performed at the Kennedy Center. Either alone or with the group Michelle has given concerts on Dewey Beach, entertained at embassies, and raised nearly $500,000 for charities to stop domestic violence.