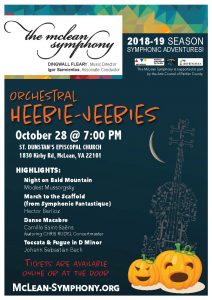 The McLean Symphony begins its 47th season with a program of Orchestral Heebie-Jeebies, under the baton of its founding Conductor and Music Director, Dingwall Fleary. The resonant acoustics in the sanctuary of St. Dunstan’s Church in McLean are perfect for such musical treasures as Danse Macabre by French composer Camille Saint-Saëns, which will feature the Symphony’s Concertmaster, Chris Rudyj, as the violin soloist. Other spooktacular works include an orchestral version of J.S. Bach’s most famous piece for organ, the Toccata and Fugue in D Minor, and “March to the Scaffold” from Symphonie Fantastique by Berlioz. The concert will begin with the first suite of incidental music from Ibsen’s play, Peer Gynt. The music, by Norwegian composer Edvard Grieg, concludes with the ever-popular “Hall of the Mountain King,” which, during the play, comes when Peer Gynt insults the trolls and their king. This program will be fun and entertaining for everyone—including the orchestra! Don’t miss it!!! HIGHLIGHTS: Night on Bald Mountain Modest Mussorgsky March to the Scaffold (from Symphonie Fantastique) Hector Berlioz Danse Macabre Camille Saint-Saëns featuring CHRIS RUDYJ, Concertmaster Toccata & Fugue in D Minor Johann Sebastian Bach