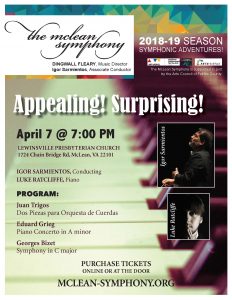 Appealing! Surprising! will be conducted by our own Igor Sarmientos and we are delighted to have the talented Luke Ratcliffe joining us on the piano. Please join us for a concert that you won’t want to miss. 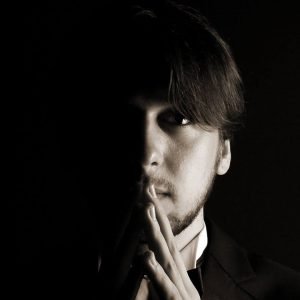 Acclaimed pianist and composer LUKE RATCLIFFE has appeared as a soloist nationally and internationally, giving diverse recitals and performing as a frequent chamber musician in concert series across the United States. A Virginia native, he began his musical studies at 13 and attended the Juilliard School following high school. During his time in New York, he was a fellow in the Gluck Foundation, an association that integrates the arts into the web of social life, giving benefit concerts and raising money for hospitals, schools, and city programs. He has played in Carnegie Hall, the John F. Kennedy Center for the Performing Arts, and the Strathmore Hall, the Banff Music Center in Calgary, among others. Recently, Steinway & Sons invited Luke to play a concert at the Omni Shoreham Hotel, after which the new Spirio piano was revealed.

Luke is an alumnus of National Young Arts, a foundation that identifies and nurtures the most accomplished young artists in the visual, literary, design, and performing arts and assists them at critical junctures in their educational and professional development. He has taken part and won prizes in a variety of national and international competitions and is also a past guest artist of the Franz Liszt Society.

Luke is continuing his studies with Dr. Linda Monson at George Mason University and recently won the school’s concerto competition. He has also participated in Arts by George and played in the gala concerts that GMU features every season. In fall 2018, the Mason Community Arts Academy hired Luke to maintain a piano studio.

As a composer, Luke began writing music at Juilliard, and in the 2017 season, he was commissioned to score Pulitzer Prize– and Tony-winning playwright Arthur Kopit’s “Chamber Music,” which premiered in Brooklyn as an off-Broadway show through fall 2017. Luke regularly works with other composers and gives premieres of new music. He worked with Jeff Zeigler of the Kronos Quartet and Paola Prestini at National Sawdust in Brooklyn, helping to produce shows and provide a greater platform for diverse new music. Luke’s compositions range from transcriptions and chamber music to original songs and pieces for piano.

This performance generously underwritten by a grant from the George Mason School of Music.